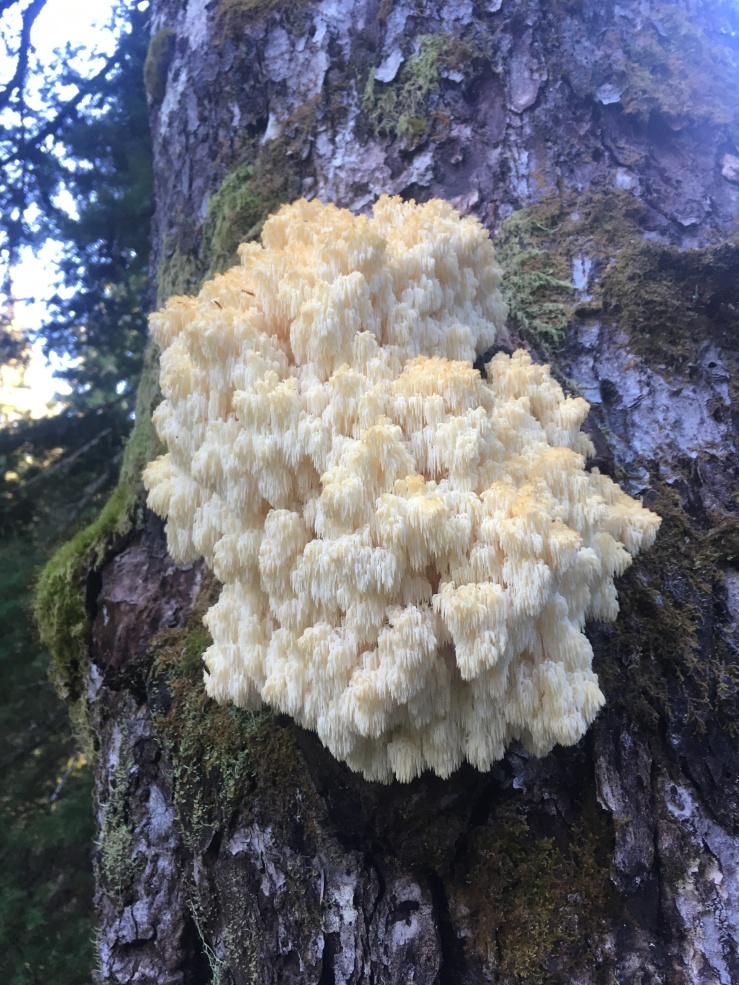 The Cascades are known for waterfalls, but they also “reign” supreme as mycological action, which also relies on the hydrological abundance of the coastal Pacific Northwest. The Bear’s Head mushroom Hericium abietis pictures above actually grows in a cascade off the side of its evergreen host. The Douglas fir was a standing dead trunk with no top. Another beautiful flush like this was growing up another twenty feet out of reach. One flush was enough for our next few dinners, and it’s one of the largest single fruits I’ve ever harvested. Hericium is a tooth fungus I’m very familiar with, having spent time as a commercial harvester at a grow operation, Snovalley Mushrooms. There we cultivated Hericium erinaceus, Lion’s Mane mushroom, but it never grew to this size! 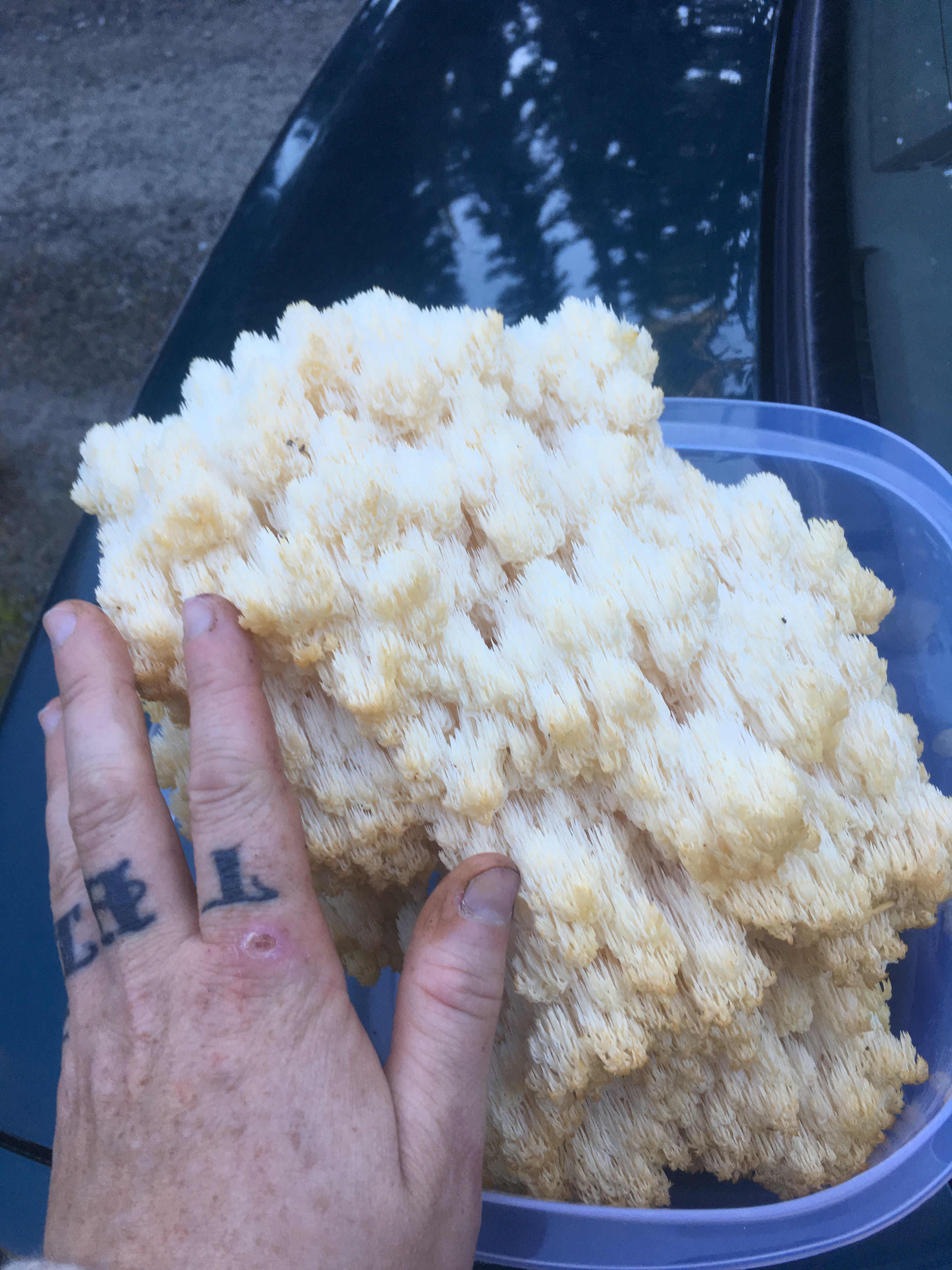 I gently pulled the gem of a shroom off the bark of the tree, right where it attached; almost like a stem, the fruit emerged from a small space, about the diameter of a quarter, where I pulled the fungus free from the trunk by tugging away firmly. This delicate removal care keeps the mushroom whole. As you handle the grouping of toothed coral like structures, use two hands until you can get it to a bowel or bag. We had a left over Tupperware that had held our sandwiches. When we got home, Bernard took time to finish removing any bark still attached to the back of the bear’s head and then pulled it apart into the smaller groupings; each one about the size of a baseball. As I heated up the cast-iron skillet, I broke each ball down into peices about the size of hazelnuts to make cooking the water out of them easier. After a med-high heat cook on one side of about 8 minutes, I stir it around and then let sit again for another 8, or until most of the liquid is out of the mushrooms. Test this by pressing down on a pice in the pan and see how much liquid comes out. When you think enough has evaporated, throw in a little olive oil and salt to taste. The meat will have the flavor of mild, sweet seafood. It’s a very special mushroom treat! 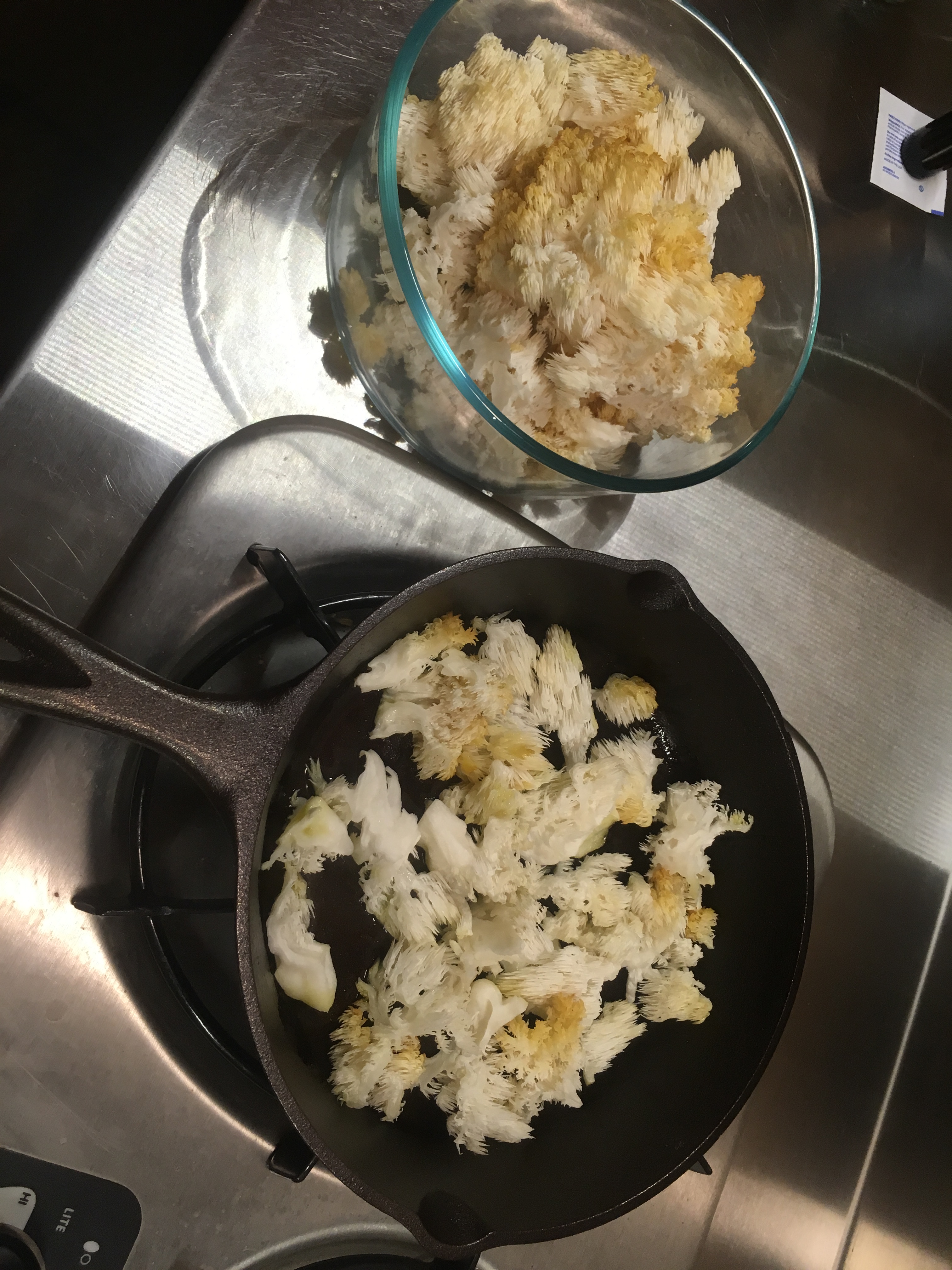 On a hunch, Bernard took us down an old logging road on our way home from Tonga Ridge. There in some 60-80 year old Douglas fir stands next to a small creek we found some wonderful Aureoboletus mirabilis Admirable Boletes, and Boletus edulis porcini. The A. minabilis was older, but a few were still edible. I’ll try to dehydrate a few, but it is recommended you cook and eat them soon after harvesting. I have never found them without some fungus gnat activity, which adds to the need to cook immediately. eat on a cracker as an appetizer with a spicy sour cream topping. 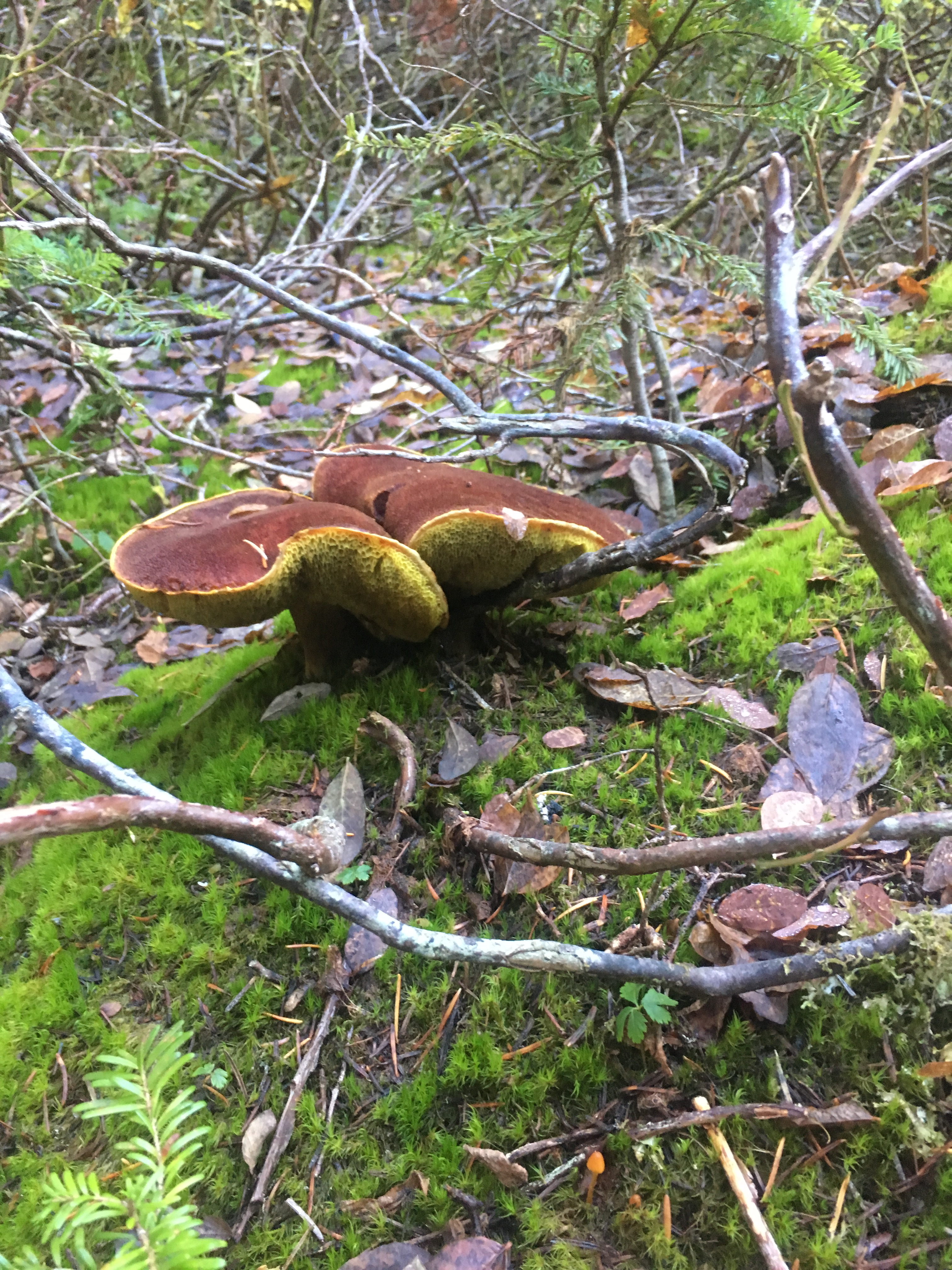 The porcini has been a pleasure to get to know this summer, both in the Southwest and in the home rage of The Cascades. This mushroom has a well-earned reputation, surly a pleasure in any occasion where you are lucky enough to find them. These gems were sprouting up along the edge of the compacted road, tucked into the rootlets of a Douglas fir with thick needle duff blanketing the area. Just the tops of a few fungi were visible, but with a little needle clump flipping we found what you see pictured below. I took mine home to the dehydrator and in cutting them up, saw mostly great flesh with little to no insect spoilage. Some of the stipes were as thick as my palm, and just as meaty. I’ll look forward to enjoying the flavorful fungi. 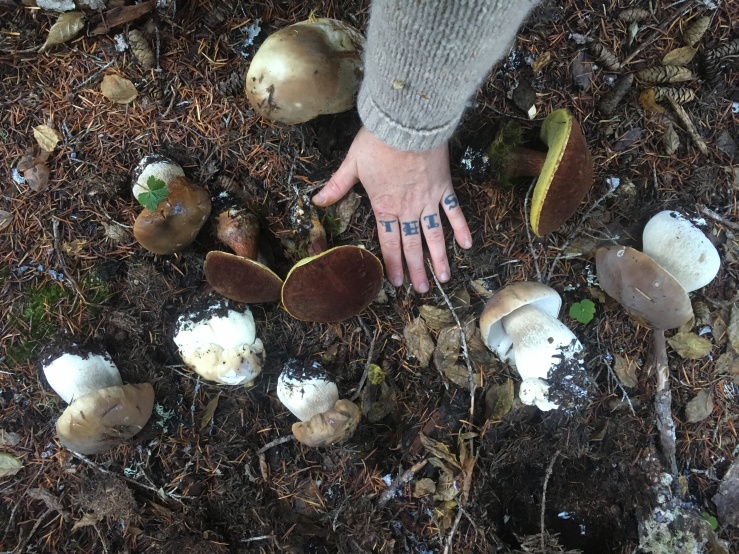 Hunting for mushrooms is a treasure hunt, and the joyous hours spent wandering across the wild back country of The Cascades is always a special adventure. October is a great time to get out into your local woods to find fungi fortunes- a porcini to me is worth it’s weight in fancy fine dining at the cost of a pleasant stroll through nature’s larder. Please remember to only forage wild edibles if you have been out with an expert and have been taught clearly what is safe to consume. You can contact Leafhopper Farm for opportunities to learn more about wild plants in The Puget Sound region and inquire about planned foraging expeditions. 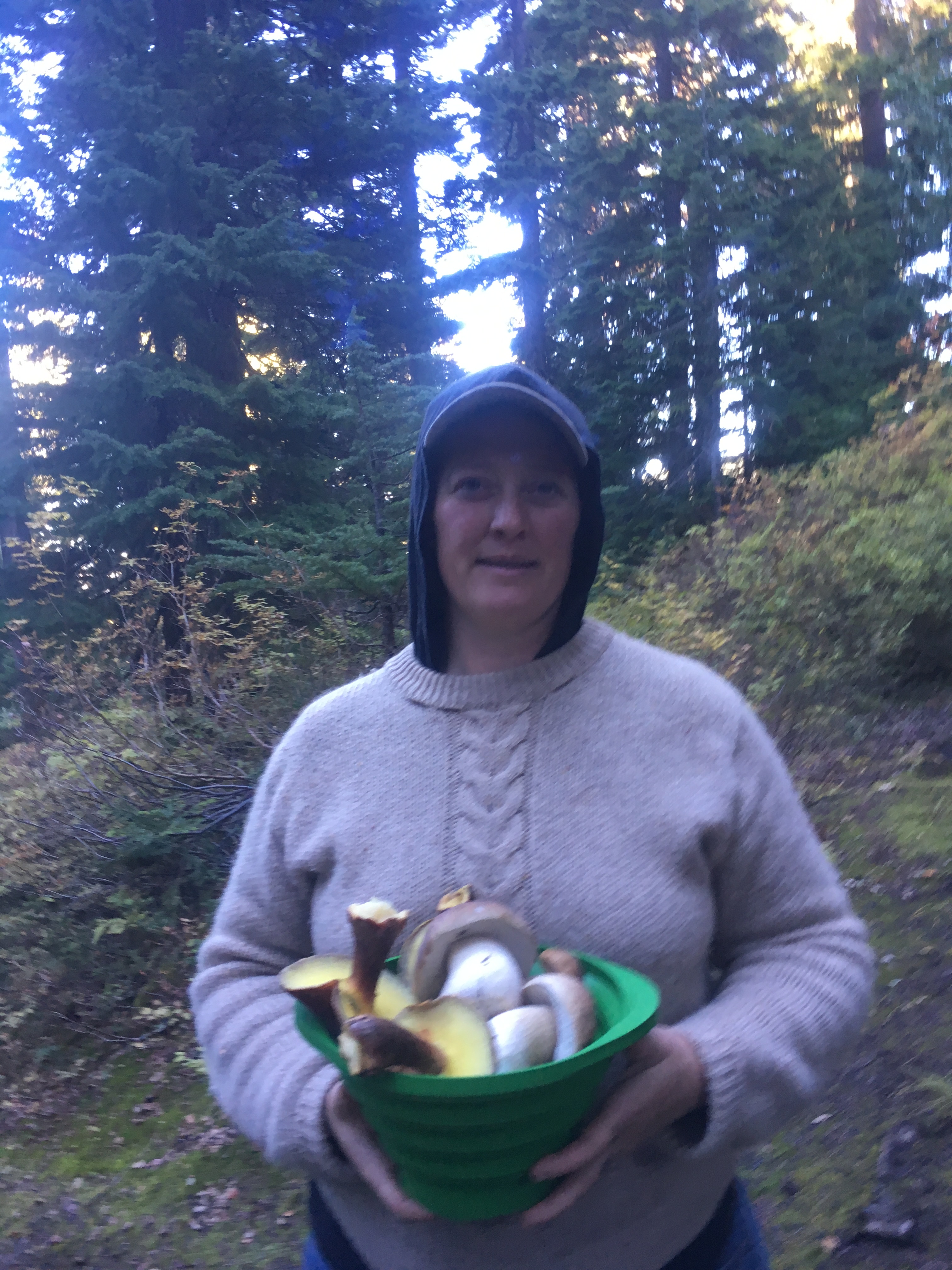