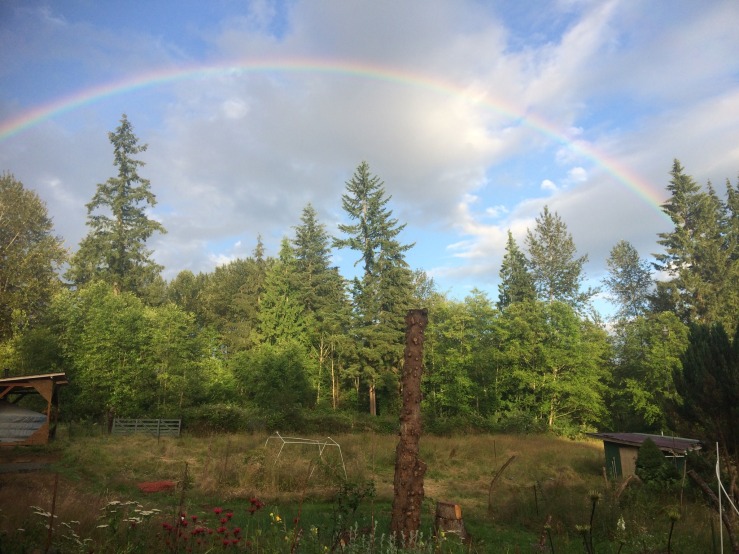 We’ve had a “normal” summer so far this year. It’s great to receive rain and overcast skies to keep things cool. Much of the rest of our western states are in drought and fire this year, but Washington seems to be getting a break, finally! It’s been a real pleasure to watch crops and plants taking off in the summer warmth and sun with the great rains, while I can focus on other tasks besides watering. We will be back into a watering schedule tonight, but it’s been over a week since I had to get out the sprinklers.

Some residents of Western Washington have been complaining about not getting enough hot weather and sun, but they live in a temperate rain-forest! Just like the lawn lovers who cut all the trees and put in grass, I say, move to Nebraska where you get all the grass; if you want non-stop sun and warmth, head south to Florida or Texas, even Colorado is a sun state. Washington is not, at least on the west side, the east side of the state is high desert, but brutal winters would make rainy cool summers look like a dream.

The weather this summer is a break from several drought years, and we’re still in need of more rain. The farm is planning for more hot weather in summers, along with harder winters of more cold temperatures, and a lot more rain. In spite of drought summers which have broken all sorts of heat records, our winters have been breaking records too. We’ve had more rain than ever, and that should make us less susceptible to drought, but that’s not the case. Instead, the rains are getting harder, and that water is shedding off the landscape and into rivers to the sea much faster, instead of the slow soaking Western Washington’s great evergreen forests need to survive.

I am eager to know how the rest of this year’s climate change will play out in The Pacific Northwest. For now, we’ll keep enjoying a temperate summer and keep the tomatoes in the greenhouse. Our additional water catchment systems will also create more irrigation security as we continue to face summer droughts. A 20,000 gallon cistern is going in this year, and we’ll have more water retention capability, which allows us to develop more food production spaces at the farm.