I took a little time off from Leafhopper Farm to travel around the greater PNW with some family who had never been here. We took them to Ozette on The Peninsula, up to Vancouver Island for some old growth and beautiful Victoria visits, then to Vancouver proper where we saw some wonderful anthropological collections at The University of British Colombia before heading east side to the Methow Valley for high desert relaxation before heading back to the farm. It was a whirlwind trip, but some highlights are shared below.

Hiking the boardwalk at Lake Ozette, we encountered vert tame deer browsing along our trail. The early morning hike got us to the cost at low tide to enjoy some seafood delicacies off the rocks, and picture perfect shots of sea stacks and dramatic skyscapes. We did walk through a few showers, but that’s so typical of our temperate rain forests. 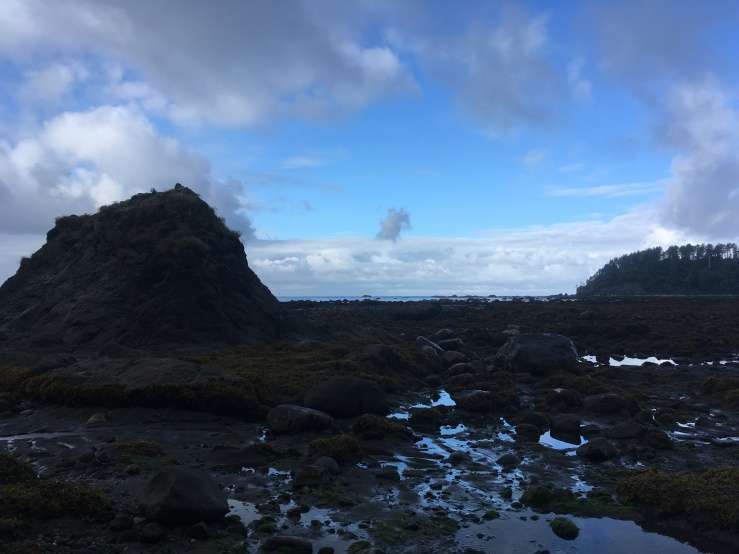 On Vancouver Island, we took a trip to Botanical Bay where some odd rock formations create special tide pools of endless wonder. Then we took an off beat path to “Avatar Grove” to see some old Red Cedar growth in one of the last stands of old growth on the island. My family asked over and over again if all the trees had once truly been as big. They also had trouble comprehending that humans cut all the virgin forest across the entire region. I reminded them of what most of Europe looks like today (where they are from) and it was not hard then to connect the devastation.

In one town along our drive, we took a “Totem Pole Walk” and saw many tribal pieces of history towering above. I learned about many of the animals on totem poles, and took away a fondness for the frog, who reminds her people of the great floods once endured centuries ago, when the world was inundated by melting glaciers, causing  ocean levels to suddenly rise. This could have been caused by a meteor impact in the polar caps, and is a story found in most cultures around the world. Another favorite symbol was “Dzunukwa” or wild woman of the woods. If you search about her online, think of “Lilith” from Middle Eastern mythology. Women are often wild, but when they are independent, they are usually also dubbed ogre or barren -eaters of children. I find this to be no coincidence.

A highlight of our travels, was heading out on a wildlife tour on Campbell River on the north east of the island. Here we piled into a Zodiac boat in cold water rescue suits and headed out into the archipelago that makes up much of the waters between Vancouver Island and main land British Colombia. We first spotted orcas, a transient verity (Bigg’s) that eat only seals. They were steaming up the coast very close to shore, and took no notice of us. Later, we saw humpback whales, which began breaching as we headed back to our dock. Time limited our ability to hang out with the whales, but it was great to see them. I would recommend this adventure, though it may seem like a tourist trap, at Campbell River, you’ll get what you pay for and more! We chose the company Eagle Eye, but they all radio together and support collective sightings across the region, so no one outfitter is seeing more.

On our way back south to catch a ferry to Vancouver proper, we stopped at a little road side park to see petroglyphs. The shapes were partially covered by wood debris, but we could make out a few sacred forms on the stone and appreciated the chance to see such prehistoric formations. Where these were located, a rocky hill shot up overlooking a large river mouth into the sound. This area was full of human shaped stone, including caves, which it is suggested might have been ceremonial in connecting people to ancient spirits. Throughout our trip, the feeling on connection with the landscape was strong, and we could see in much of the native artwork, a sense of belonging to the natural world. It is a sense I feel very strongly today, and saw in the forms on the rocks where we stood.

When we got back to Washington, more driving through The North Cascades was in order, and we wound our way through the mountains for some final rest on the east side. It was a beautiful experience, and I was so happy to be back in the high desert and Ponderosa pine dominating slopes. It is a pilgrimage to go back and forth over these familiar peaks, and such a gift. From mountains to sound, this landscape is so special, sacred, and monumental. In less than two weeks, we got a glimpse of her majesty, and still, only the tip of a rich cultural and natural place.