We went up a few hundred feet to see how things were getting on at Leafhopper Farm. A good friend brought over her drone for some fun flying, and it was wonderful (though loud). The evolution of landscape in the last six years shows across these acres, and there’s so much rich terrain, it’s hard to pick a place to even start. Above, using the central turn around drive like the center of a clock, we’ll start in the top right corner at one o/clock where the pond is. Currently, the water is a third of the size designed when we dug. It’s still an impressive feature, and will seal in time, making a fabulous habitat for wildlife and people alike.

Moving down to about three o’clock is the double cabin and sunken garden space where a raised bed stands. There is room for more raised beds as production demand increases, and irrigation from rain catchment off the roof into a 5oo gallon cistern. Note that just to the south of the cabin, at four o’clock, we topped a western red cedar to protect our structures, and bring more light to the gardens to the north of the tree. Just to the left of the tree in photo, is the green house, which is hosting mostly tomatoes right now. Our starts are out in the kitchen and front gardens now. Due south at six o’clock is the driveway, but just to the left of that is another cut tree. A hybrid Christmas tree planted by the previous owners was a cause for concern to structures, and again, we cut to also let in more light to the upper gardens, which has made a HUGE difference in production this year.

Between seven and eight o’clock are the swales, ready for planting this fall and winter, after our 20,000 gallon tank is installed to flood irrigate. Our well house stands at nine o’clock, and by eleven, we’re looking at a cedar grove slated to come down later this week. Below is a close up of that grove and the buildings, including the shop and tiny house structure at noon in the photo above. This grove was stripped of much of its bark by livestock overwintered without enough fodder. Horses are notorious for this behavior, and it’s killed a lot of trees here in The Pacific Northwest. The grove just to the north of the barn structures will also be thinned, giving us a load of wood to mill locally and build with. 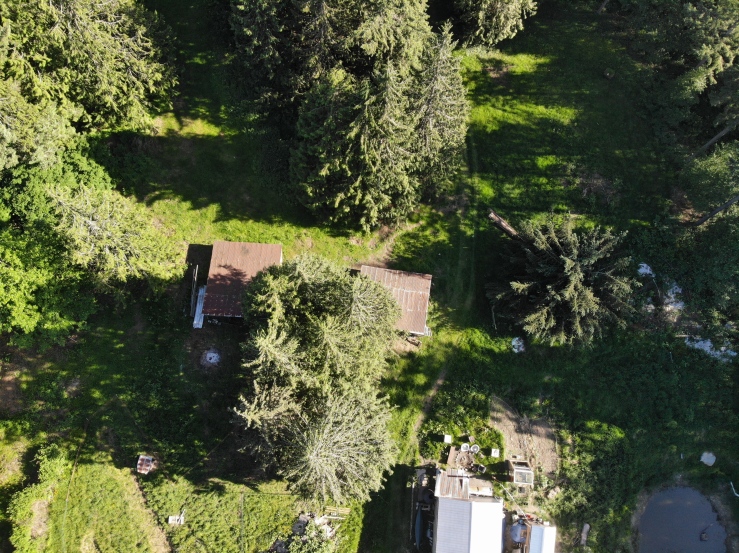 The current barn and coop structures are in desperate need of rebuilding, and some good lumber will aid greatly in making repairs, as well as putting in a new biomass/greenhouse structure for rain catchment to fill our new bladder tank. This will be the only planned “logging” of Leafhopper Farm during my stewardship of the land, and hopefully the last. However, we’ll have King Conservation District out this week to talk about the farm’s forestry plan, and hope it’s all conservation and restoration planting from here on out. On another note, we’ve already planted replacement trees equivalent to this grove on other parts of the property, and will continue to reforest in our stream buffer area, and other groves on the land that could use some diversifying.

In navigating the drone to look at different aspects of the landscape, I could not help but notice how green and lush the property looks, and yes, it’s Spring, but the land still looks diverse and thriving, without bare spots or dead zones due to over grazing or chemical abuse. There are tended garden spaces, human and animal trails, earthworks, and so much vegetation, I love it! The shot below of the main house and garage show how much gardening is going on in zone 1.

A lot of the kitchen garden space has turned into native plant nursery, which will continue to lead our gardening plans as we shift more into perennials and under-story stock. Hedge plants also thrive here, and once established, can be cultivated as “mother plants” to new offshoots. We can take cuttings and root stalk from the natives to perpetuate more of each species on the landscape. I’ve already been experimenting with some of our cultivars, most recently lavender, which I pulled from all the herb gardens, as they were becoming too big for small rock gardens. I did leave rooted branches behind as I dug up each main shrub, and those branches are now filling out as new shrubs themselves. In replanting, I doubled my lavender population.

In the photo above, you can see there are three main gardens, the kitchen, front, and raised beds. All planting locations have hose access from a spigot, and in future, a more elaborate drip irrigation will be implemented. Right now, we’re still using primitive sprinkler heads and a single hose. It’s a passive system, but I move the sprinkler around and get the focused weeding done in the process. We have more in the gardens this year than ever, with a third planting happening in the next few weeks, to fill in the last open spots for food crops this summer.

A lot of the drone footage was video, and too large to upload onto this platform. We’re hoping to upload them on our Youtube channel this week with more commentary.