Our head doe dropped her kids last weekend and we’re now celebrating three kids at Leafhopper Farm! These two newest additions to the herd are settling in now after an initial some what violent entrance into this world. When I heard the cries coming from the barn, I knew what was happening. Coming into the birthing stall, I found two wet kids shivering in the hay and nearby, a broken water bucket that had been cracked down the side in two places. It looked like Brownie has stepped backwards into the bucket in the throws of labor. Neither kid was wet with water, and the after birth was laying neatly in a pile on the floor. Thankfully, no one was drowned. 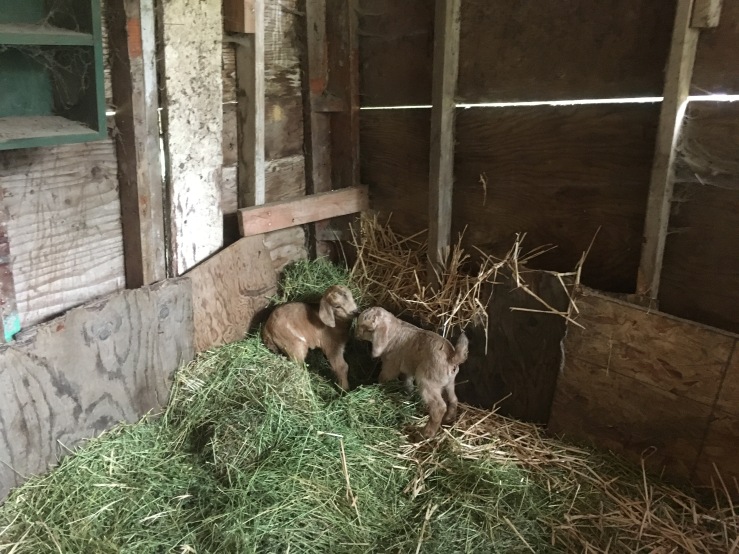 The two kids were up and kicking almost immediately, it’s an impressive thing to see newborn animals right up and active within minutes of their birth. These two were hoping around and looking for Mom’s milk. Meantime, our other doe, who had kidded last week, was calling in confusion as her own baby wandered around his new friends trying to meet them. Brownie did not care, already acquainted with Gwern. The new kids were male and female, another set of twins! Well, as Branwen began to sniff the two new kids, she suddenly lifted her ears (a sign of aggression) and began snorting (another sign of aggression). Then she charged the little male goat and pummeled him with her horns. This behavior took me off guard. Brownie was so calm with Branwen’s kid, I had not expected the same courtesy to be withdrawn once Brownie’s kids arrived.

Initially, I thought the attack was simply a miscommunication, in which one male kid was mixed up with the other, and both Mom’s were confused. I tried moving each Mom with her babes to opposite sides of the stall, to prevent mixing in the moment of bonding for Brownie. But Branwen was determined, and, crossing the stall, she grabbed Brownie’s male kid by the shoulder and threw him across the stall. Blood came out of the little kid’s nose and that was enough to tell me this was not going to work. Branwen and Gwern were moving to another stall. After the separation, everyone settled down. This kidding issue is not common, and never happened before at Leafhopper Farm.

My theory now, is that Branwen picked up on the fact that another buck was now in the herd. I was not able to find anything about this online, but what I did see was aggression towards only the male babies. The little girl goat was left alone. There must be something in the smell. It all came down to sniffing, then butting. What I know now is that my does must be separated at kidding time. Luckily, the barn can turn into 3 stalls, and everyone has settled in happily. The kids are alright!