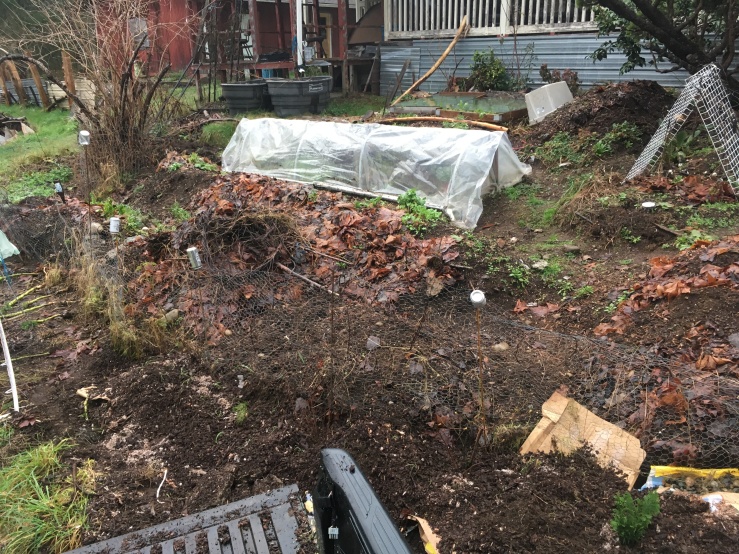 We’re already planting Spring crops at Leafhopper Farm. From radishes to Brussels sprouts, these little seeds were sewn under the cloche for protection against future frosts. I’m also shrinking the garden size by moving the lower fence back a few feet. This is to harvest any nutrient dense soil which has eroded down hill over the past few years. In setting back the fence and stirring up so much dirt, I might as well plant something, so I did; lots of hedge plants! 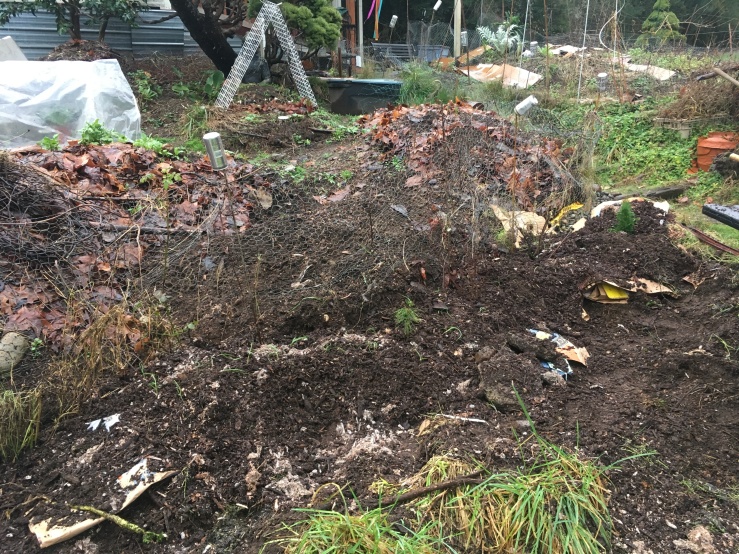 There are now roses, a shore pine, and kale dug in on the outside of the fence line. Hopefully, as these plants take, they will build a wall of green to keep any plant predators (like goats and deer) from getting into the garden. The new hedge will also bring native plants into the mix, encouraging better pollination and greater diversity in and around the garden.

New path stones have been set in the main walking trail through the garden. After slipping down a muddy hill for a few years, it was time to put in some good footing. The stones are loosely set in the soil and can be moved around as needed, because the garden is a fluid place where dirt moves often, and there are no set beds. Note all the spinach coming up in the lower photo (bottom frame). 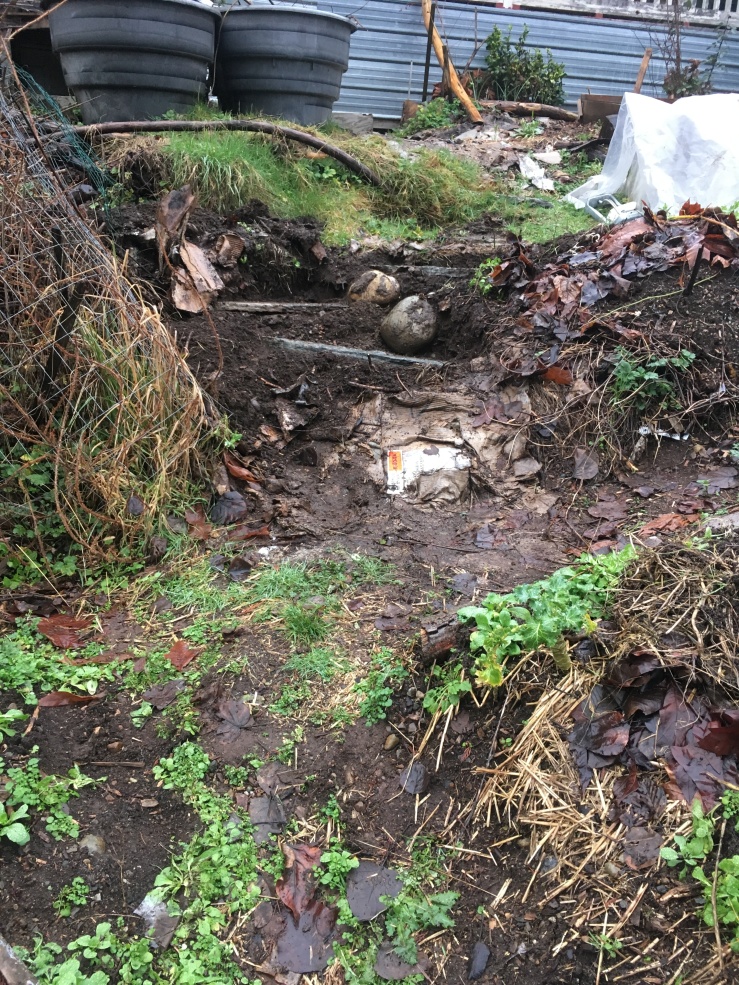 To move the fence back, a lot of rich soil was moved up into the upper garden and piled, then covered with cardboard so the heavy Spring rain does not leech out all the great nutrients in that soil. Other soil was piled below the cloche for a new row, where the cloche will move next. It’s good to move things around in the garden from time to time; both to deter infestation, but also to rest some soil, giving it time to renew and refresh for better growing. You can also have bacteria in you soil that might be combative with certain crops. I know we have a leaf mold which usually attacks our squash plants in late summer. That mold is in the soil, and will get on the squash anyway. You can spend a lot of time worrying about it, or just plant enough squash to get the fruit you need and allow for some spoilage too. 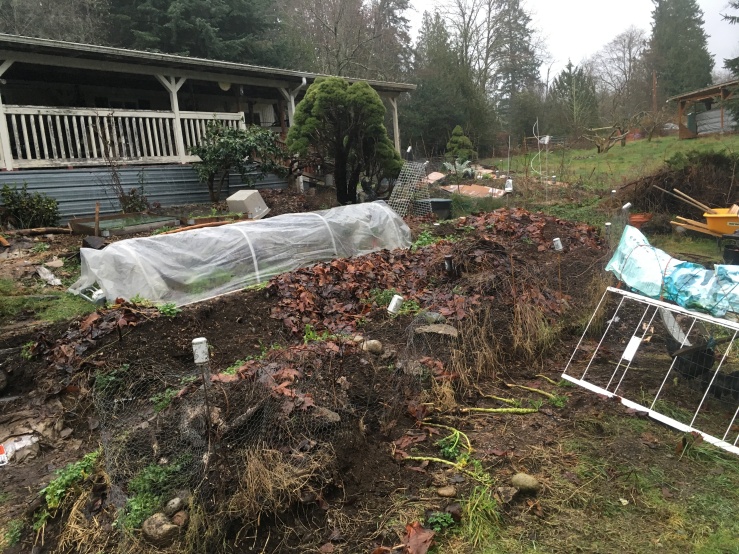 This year, there are a lot more crop plants volunteering from the soil. It warmed up quick here, and though the rains are sill very persistent, the weather has been staying above 40, even at night, and that’s signaling the seeds to germinate. It’s part of what motivated the first planting so “early” this year. I will also not be using grow lights to jump start the season. Last year, I did this with great enthusiasm, and ended up with only a few plants from the inside early start under lights to make it to maturity in the garden. Perhaps I should keep them inside longer, but I’ll use the cloche instead this year and see if it makes a difference. 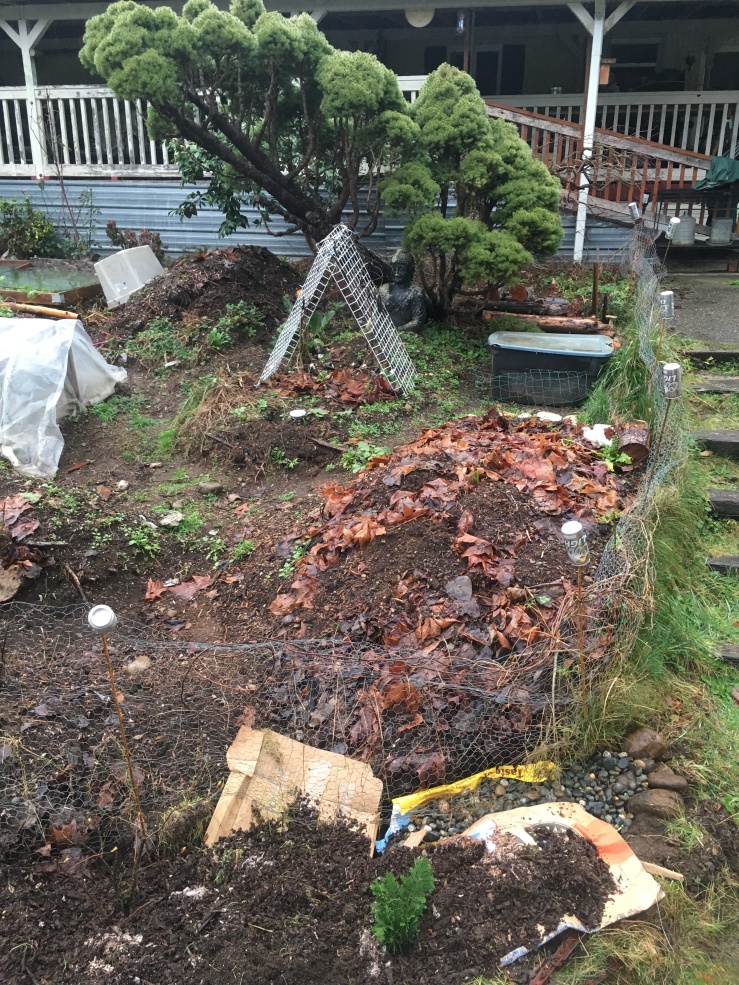 I also did a little maintenance on the drainage in the garden too. A down spout from the roof catchment in the picture above used to spill out onto the driveway below. Now, with a little drain rock and some digging, I’m redirecting the flow into the new hedge bank below the garden. This new direction of flow invited the water to nurture plants we eat, rather than the lawn. It’s another experiment, and time will tell weather or not this shift in flow will work.

With all this warm weather, it’s tempting to put in the whole garden now, as a jump start on the season. But knowing Washington weather, we’re still in for some freezing temperatures before the end of April, and I don’t want to have to plant twice. There are cold hardy species which can go out now, but check a planting calendar for your area before putting in seeds.

We’ll also try more starts in the greenhouse, though keeping things watered is a challenge and I’m not putting irrigation drip in yet… or am I? 😉