In January of 2016, I pleachered some young cherry to begin laying out hedgerows on the property. Now, two years later, it’s time for another laying! Below is a woven chaos of living wood fence. In only two years, the bitter cherry Prunus emarginata is a perfect species to work into a living hedge. 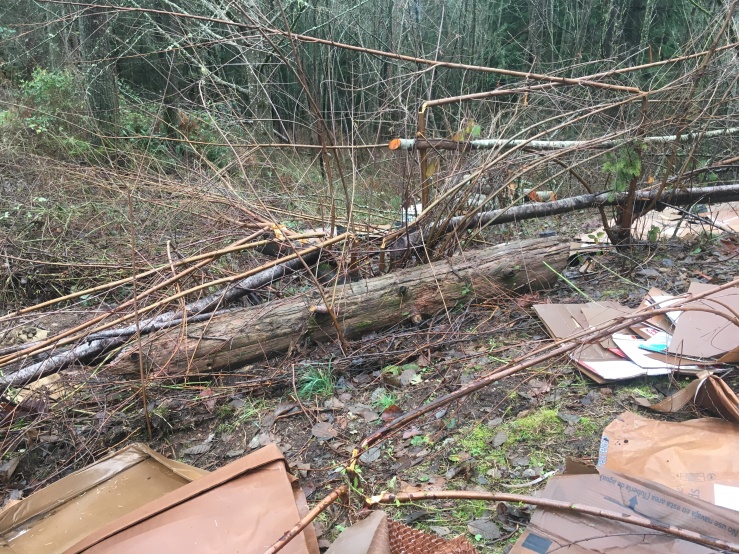 When I lay the cherry initially back in the start of 2016, my intention was to keep the lengths alive and sprouting along the trunks like nurse logs. This stand was nicely grouped along an old fence line where I would like to establish hedgerows. With some careful cutting, I lay the trees in a “T” shape. On the west side of the T, mushroom habitat and white pine plantings have been established along a habitat buffer zone where livestock will not be grazed regularly. on the east side of the T, goat and chicken rotation continues around a newly planted black walnut Juglans nigra, tree island will encourage under-story habitat with more good edge space for hedges and diverse brows. 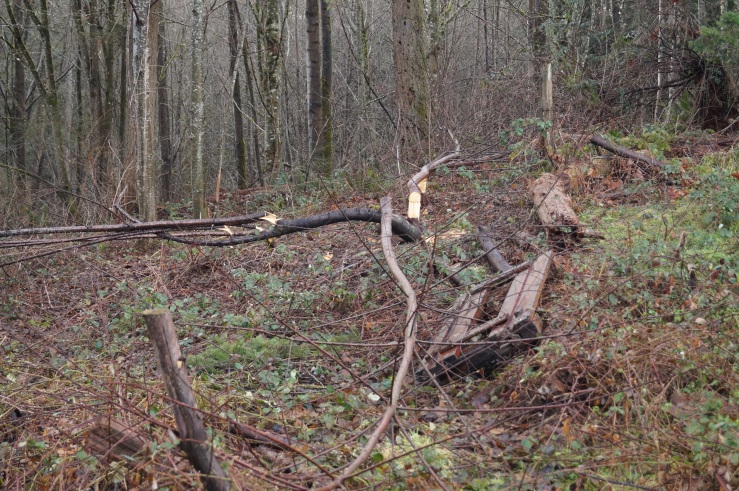 These comparative photos give me so much motivation! In just two years of coaxing and coursing, the biomass build is so noticeable. Now with the addition of native replanting and some intentional shaping, these living fences. In the picture below, the branches at the stools (cut stumps of the cherry) are over six feet high now. It will be interesting to see how the trees blossom out this year.

Above is an up close of the freshly pleachered stools. These trees are actually the branches of a leaning cherry trunk which is struggling with canker. This is common in PWN climate. There are organic sprays that can help prevent and combat this infection, but it’s so rampant, I’d rather keep encouraging the tree while it’s able to thrive while planting new species and adapting the hedge against the canker.

Along the cherry fence, new plantings of roses, crab-apple, twin berry, and white pine (to name a few) native plantings are going in to reinforce and diversify the hedges. P. emarginata is short lived in our evergreen forests. The trees are stressed by our poor soil and compacted glacial clay and will not reach full maturity. The Forester suggested cutting them down, and other cherries in this stand which are not convenient for the hedgerow will be bucked up and inoculated with rishi mushrooms.

The hedges as Leafhopper Farm are slow to take shape, and this living hedge is a great reward for all the shaping work done over the years. In future, the cherry will die back, followed by the natives planted this year, who will eventually establish and be pleachered as these cherries were today. The western white pine will not be pleachered, as pine do not “shape” well and prefer to be climax canopy species. Pines can also handle compacted clay soil, setting the stage for a successful mature stand of forest a few generations from now.