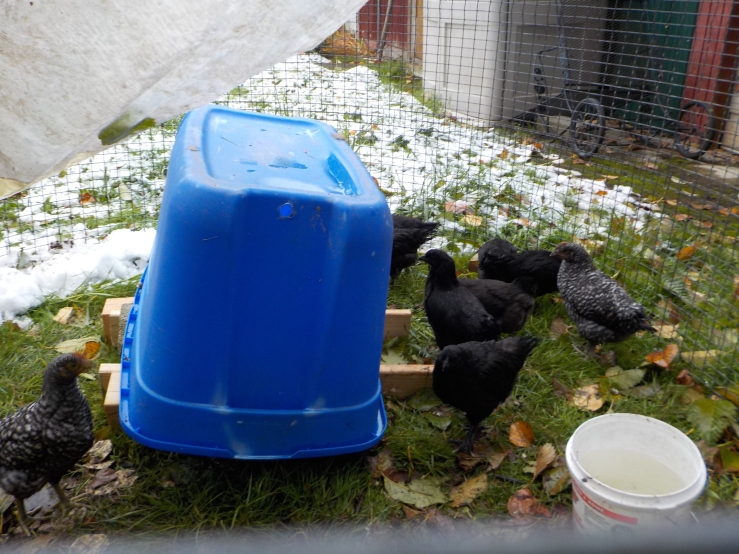 Chicks are outside in the snow! Winter weather continues here at Leafhopper Farm as we visit with the youngest members of the farm as they venture into November fully fledged. There are a few red combed cockerels in the crew, and they also all seem to be barred. This could be a rockin’ cool sexing color code, but I don’t think so.  There are a few larger combs on the solid color chicks too. Lots of fun subtle markings, including white lace neck bands. This is the future of chicken breeding at Leafhopper.

Though we started in the incubator at 18, we are down to 13 now. Last weekend a predator took 3 chicks, and two eggs never came to term in the incubator. This is the reality of chicken raising; high mortality. That’s why commercial operations have hundreds to thousands of birds and are constantly buying more to replace the dead. At Leafhopper, we are trying to reach holistic management of the birds by breeding small batches.

My goal this year was to double the home flock, while making plans to create a portable coop system for a larger flock of layers for our egg co-op. Large populations of chickens at Leafhopper does not feel right, and so, instead of getting commercial layers from a hatchery (like most larger scale farms do) a step up in hatching our own birds began. After two good incubation periods last spring and summer, along with the purchasing of a few hatchery dark layer breeds, the farm reached a flock number of about 40. Until the new portable coop is built, we’re halting breeding. Things will pick up again next Spring. By then, there should be a coop built. 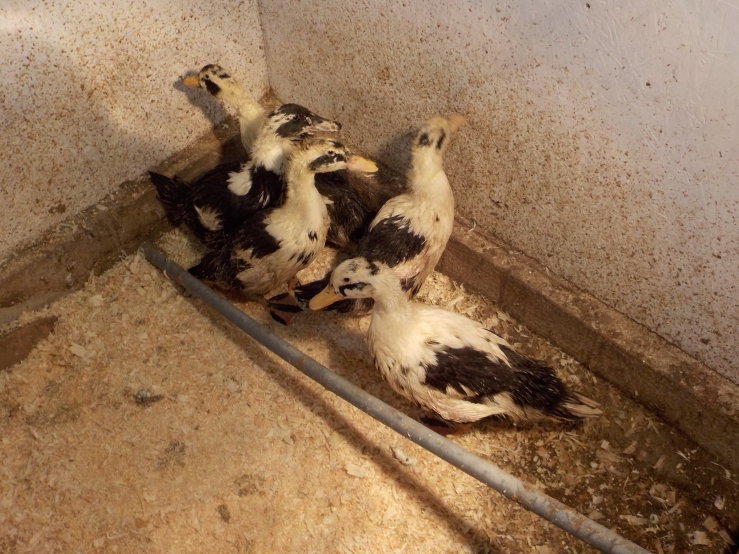 The ducklings are growing in their feathers! The little babes need a bath, so we’re taking them to the pond later today! It’s done snowing and the temperatures are up again above freezing, so it’s duck dipping time! As you see, these birds are a little dirty. The splatters on the wall are an indication of how wet these animals can get, even with a small bucket to dunk their heads in. Ducks are the most messy baby animal I’ve ever had on the farm. Pigs pale in comparison! It was so silly to incubate ducklings at the end of the summer going into the cold months. Not a good plan!

If I had raised them in the spring (I did try a batch then, but the incubator was not working right and the whole batch was lost) they would have mature feathers grown in and be in an outdoor paddock situation by now. If I did not have the chicks in the round pen at present, the ducklings would be there. In future I will also not raise ducklings and chicks at the same time. Best timeline:

early spring-chicks: March is cold, but indoor incubation can start then with newly hatched babes raised in the shop till it warms up in May

early summer-ducklings: April is perfect for ducklings, and the incubator will be available after the first hatch of chicks. By the time the chicks are out in a movable system, ducklings can move into the shop until their feathers grow in, then it’s warm enough at mid-summer to be outside and hardened off for the cold months ahead

early fall- chicks: a last hatch will give us pullets by spring for egg laying

Winter is just not a good time for baby animals. The cold and damp are hard to keep at bay without a lot of extra energy. All the adult animals are hardened off and large enough to keep warm. It’s rough on the ducklings to still not have full plumage. Even the chicks, who are a smaller heat mass, have a good feather layering to keep warm under by now. The ducklings will fledged out soon, but it’s too cold to let them stay out at night. Consequently, there’s a mess in the shop corner where they reside. It’s not ideal, but they are super cute, and will be outside soon.

My plan this winter, is to let the ducks seal the pond. There will be fluctuating water depths to allow activity along the entire bank at both low and high water flow. The duck numbers are low enough to prevent complete destruction of the wetland, yet enough poop and wallow power to plaster the edges with good duck dookie. This method will be a lot less invasive than pigs. Although, if the sealing does not work with ducks, pigs are the next step. What learning to come!