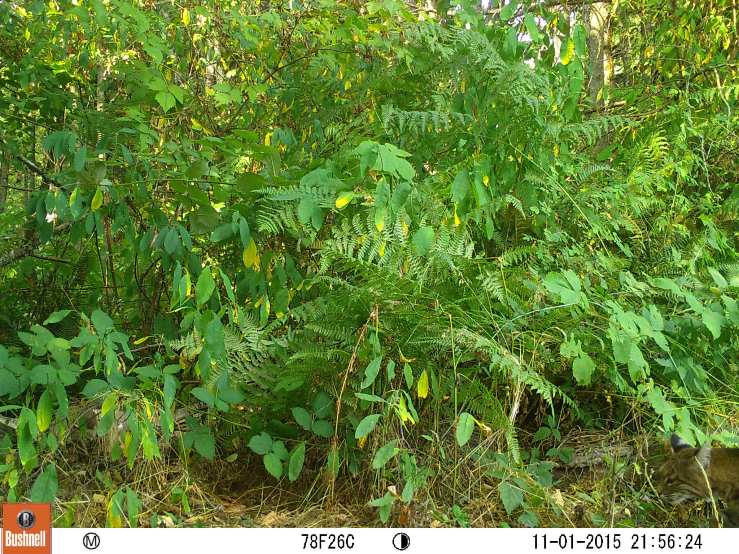 Yes, in broad daylight, a Bobcat Lynx rufus stalks along the Zone 1 western fence line. Last week we had a night attack on our chicks and one was predated. This daytime testimony leads me to think the cat was the culprit. Here again, we catch her in the night on the same path.

Though she is a resident of our area, I cannot say with 100% confidence it was she who predated our chick, but highly suspect. In this shot, only a few hours earlier, someone else had moved through the same game trail.

Thought the year and month are wrong, these photos were taken in September of 2017. Almost one 1/2 hour later to the minute, the cat came through, though heading in the opposite direction. Still, the deer and cats are out and about, stalking one another and moving in the shadows of darkness. This doe is older, not one of the young I wrote about in the previous post. She’s mature, and moving through at many different times, like the cat.

This picture was taken almost two weeks after the Bobcat came through in broad daylight. She’s familiar with the trail and feels confident to move through at this time.

A neighbor of mine has been watching the deer for the past few months and noted that he had seen a lack of deer activity in the past month. At Leafhopper, they have been active continuously. The same neighbor said he’d seen a Cougar Puma concolor stalking the area several times, and assumed it had pressured the deer into hiding. This could be why the mature does are moving around the farm during the day. The Bobcat might also be stirred up by this unusual activity and responding as well.

This is all speculation, what I can confirm is the animals being present at these times through trail camera documentation. I can’t stress enough how important it is for land owners to utilize these cameras. My neighbor was seeing the odd animal, but not fully aware of nocturnal activity. With a mounted trail cam on active game trails, the vigilance to see at all times is met. I’ve learned so much about the land and who is utilizing it when. The information is priceless. I hope I never see a Cougar on the trail cams, but if it is on the land, the camera will get it one day.

In the mean time, I’m happy to know Bobcat and Black-tail are thriving on the edges, and predation can be addressed by creating stronger protection zones for my chickens. I never blame the wildlife for it’s success in feasting off my production, but I do recognize my responsibility to protect my livestock and keep a vigilant awareness of predator encounters. Next year the farm will have a dog again, and I’ll have piece of mind around the Zone 1 perimeter. Till then, trail cams can tell me when and where the wildlife wants to come through, giving me opportunity to buffer game trails and keep my chicks away from hungry cats on the prowl.