Eggs of every color at Leafhopper Farm. The hybrid hens are starting to lay, our first farm bred and raised chickens! Once the dark egg layers mature and begin laying next Spring, we’ll have chocolate’s too! It’s amazing to see so much diversity in the eggs, and such a mystery as to how this happens; until you start looking at chemistry!  All eggs start out white (calcium carbonate) and then, depending on the breed of chicken, pigments deposited on them as the eggs travel through the hen’s oviduct cause the tint.

It takes a hen 26 hours to lay an egg, and the shell is completed in the first 20 hours of the laying process. Genetics determine which chemicals tint the egg shell.  Ameraucana birds deposited oocyanin pigment on the egg. Never heard of oocyanin? Well, it’s a byproduct of bile production. Bile helps break down food, especially fats, and is green in color. This pigment permeates the egg shell resulting in the interior and exterior of the egg being a washed out green color which looks blue. Bile also assists in the breakdown of red blood cells.

That same blood cell breakdown is responsible for chickens that lay brown tinted eggs. Protoporphyrin is a byproduct of hemoglobin, the protein holder in blood. In this tinting process, the pigment does not penetrate the interior of the egg, but tints only the surface of the egg, which is why brown eggs are white on the interior. This is the most common way eggs receive color, and includes speckling as well. You can wash off the tint with vinegar or rub it off with sandpaper.

In the case of an Olive Egger, (like my hybrids) a brown pigment overlays a blue egg shell, which gifts us a green egg. Many of my young laying hens are mixes, so it’s no suprise that olive eggs will continue to show up at Leafhopper Farm. Take time to look closely at your egg shells to see the pigment differences. If you have ever dyed an egg with food coloring, you see how the porous surface of the shell takes on pigment so easily.

On the other end of eggs are the roosters. The guys don’t get a lot of press, and I thought I’d take a moment to talk more about how the rooster has evolved in our domestication and later industrialization of chickens in our commercial agricultural practices. Eggs hatch out 50-50. That’s a fact the poultry industry wishes it could manipulate, like everything else about the chicken we know today, but mother nature is a compelling woman, and with good reason. In mass production, “Sexlink” is the closest “solution” commercial hatcheries can use to at least sort chicks. In an egg business, roosters cannot produce, and are therefor disregarded (killed) as chicks once they are sorted from the flock. Whenever you see “chicken meal” in things like dog food, you’re buying those baby rooster chicks in their most valued industrial form. It’s sad, but true.

In our attempt to streamline animal husbandry for our industrial convenience, we’ve lost some knowledge on how to better utilize roosters. In France, the once cherished Capon (castrated rooster) has been lost to us. Yes, there is a way to castrate a rooster; the bird then becomes complacent, stops crowing, and gains a fair amount of weight, putting it right up there with any commercial meat bird in pound for pound muscle mass fit for human consumption. This practice was abandoned as it is a type of minor surgery to the young cockerels. A Rooster’s scrotum is located below the middle of the back inside the main cavity of the bird; not hanging down conveniently, like most other livestock. Because it took some finesse, it lost support as the assembly line pushed chicks into sortable genders to save costs and time. Sexing by color removed the need to raise roosters at all and changed the industry overnight. 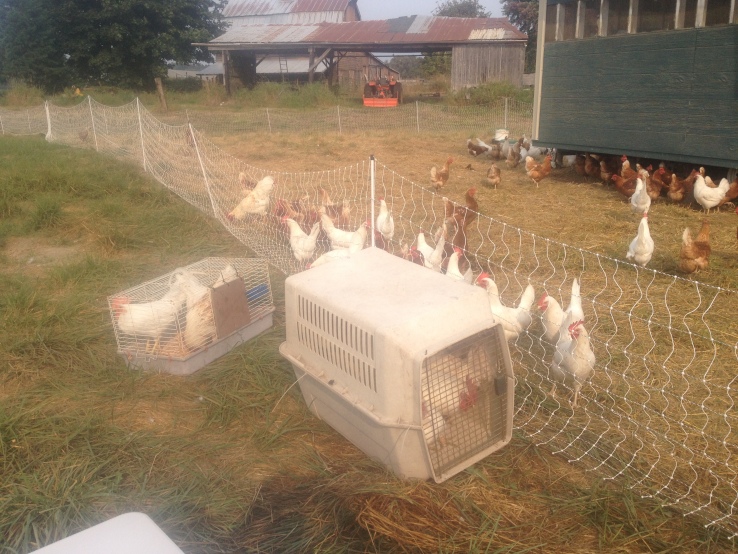 Sexlink is a great genetic trait, but not 100% accurate. I spent last weekend helping a fellow farmer cull roosters out of her laying flock. The boys arrived as part of the “sexed” clutch from the hatchery, which never gives a guarantee on gender. Though the vast majority of chickens are hens though this sorting method, some males still end up in the flock and eventually, you’ll have to deal with them. These roosters ate up a lot of grain, especially as adults. Capons would eat a lot too, but they would be putting on the weight, where as these roosters still have that charged up testosterone eating up the massive caloric intake for prowls and aggressive encounters with other males. Capons don’t fight, and live peacefully together in their shared neutered state. A rooster can be put in with them no problem, even mixed together with other hens, and there will be no fighting. The Capons are not putting off pheromones to trigger the aggressive response from the in-tacked males.

I have a friend who has spent a few years learning how to turn a rooster into a capon, and she’s agreed to start teaching me when I have a batch of young roosters to castrate. You have to operate when the birds are young, and there is risk of mortality, usually due to infection after the operation, so this is not a job for the faint of heart. However, this practice is not abusive, and to me, is a heck of a lot more humane than grinding chicks into chicken meal. Remember, 50% of the chickens hatched are male, period. There is no genetic modification or quick fix to this biological circumstance. For the smaller farmstead, Capons make sense. Also, if you have backyard chickens in a neighborhood which does not allow roosters because they crow, a Capon would be quiet and easy to integrate into your flock. He would still be a protector to the hens, and offer you great meat if you wanted to harvest him later on. If you’re hatching your own farm flock, the Capons would keep the male half of your clutch useful.

As of now, I keep my roosters not in breeding away from the flock of hens in their own bachelor coop. I feed them minimal scratch grain and all the fresh pasture they can eat. In late fall, I butcher them. It would be much better production on the farm to Capon the crew of young males and keep them in the flock as my meat birds for the year. I’m going to work with my friend who knows how to safely operate, and hopefully have the skill to pass on as well. Sustainable practices are the name of the game, and no matter who came fist, the chicken is the end result.