The snow that came Sunday night is now melting away at an incredibly fast rate. This is exciting because literally overnight, the pond has filled to the high water mark and with the weather outlook set at heavy rain for the next two days, we might reach outflow capacity for the first time at Leafhopper Farm!

The stake right below the outflow pipe marks the highest point the pond has filled since its creation in 2014. The last cresting happened in the winter of 2016 when we got record rains through that winter. Still, we never had the snow melt or several continuous days of heavy rain. I will keep updating on the pond level today and tomorrow. The quick melt in combination with 4-8 inches of rain should push us to the spillway. This is so wonderful! I’ve been dreaming of this pond being full for years, and now we’ll see it. (I hope)

Getting the pond to the half way mark is easy. It’s that other half, the 70′ width of the 14′ deep span,so much more water than what’s already there in the picture above, which continued to be the hurdle. Since we jumped to the high water line overnight, literally, I think we’ll make it this time. Stay tuned! 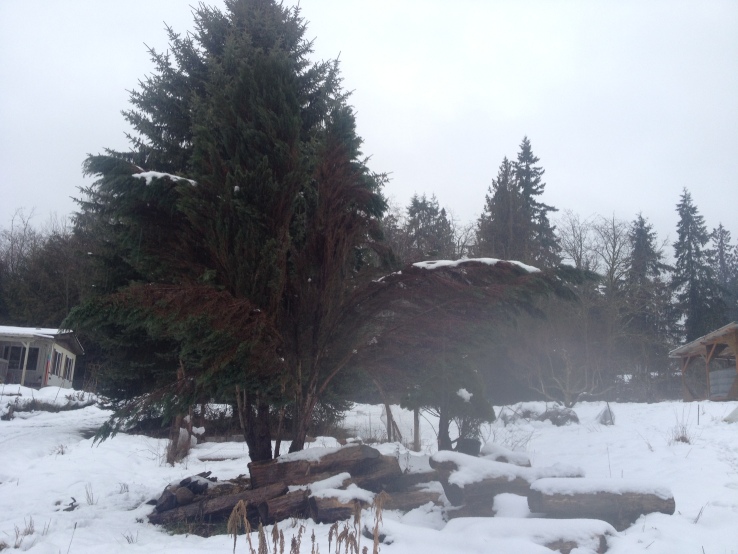 The snow left a bit of a mark on the land, pushing down the branches I spoke of in an earlier post, and collapsing the greenhouse. In the picture above you see branches of this juniper which are vulnerable after being limbed up last spring. Now, the exposed branches have no outer support and are bending out, which is good, the tree will get more light and bush out a bit more. We’ll reshape it this spring again.

Less noticeable in this picture are the blueberries. Center right in the picture, before the ger, there is a sad looking pile of shrub matter and netting which was once the blueberry patch. Somehow, the netting, which is verging on microscopic, caught enough snow to collapse the entire net structure, crushing the berry bushes. I think they will rebound, but moving the netting while it’s still tangled in wet, heavy snow would be a mistake. I tried to lift it and tore the netting so it will sit till complete melting has happened, by the end of the day today if my hunch about the warming is right.