One of Leafhopper Farm’s biggest earth works project was digging the pond. It was first implemented in 2014 and has now become an established feature on the landscape. Fish were added in the spring of 2016. They are still thriving, and new small babies have been sited on the surface feeding which is a delight. Washington will receive a lot of rain over the next few days, and that will mean additional water in the pond from the coming rainy season. The fish will have an ever growing playground to frolic and feast in.

This morning I pulled all the young alders from around the banks of the pond. They will continue to sprout over the next few years as they are the first of a reforesting attempt by mother nature. In both of these photographs, you can see the reflection of the young alders before their removal. It is noticeable how quickly leafy cover struggles to create canopy over the landscape. To maintain the openness of the water feature for viewing enjoyment and access by residents, the land will be stewarded as an open space. In time, well established ground covers and pasture will take hold. A few native willow species have been planted, and cattail is encouraged at this time. The next major pond project will the the construction of a few floating peninsulas for native wetland plant nurseries which can raise and lower with the frequently changing water level. 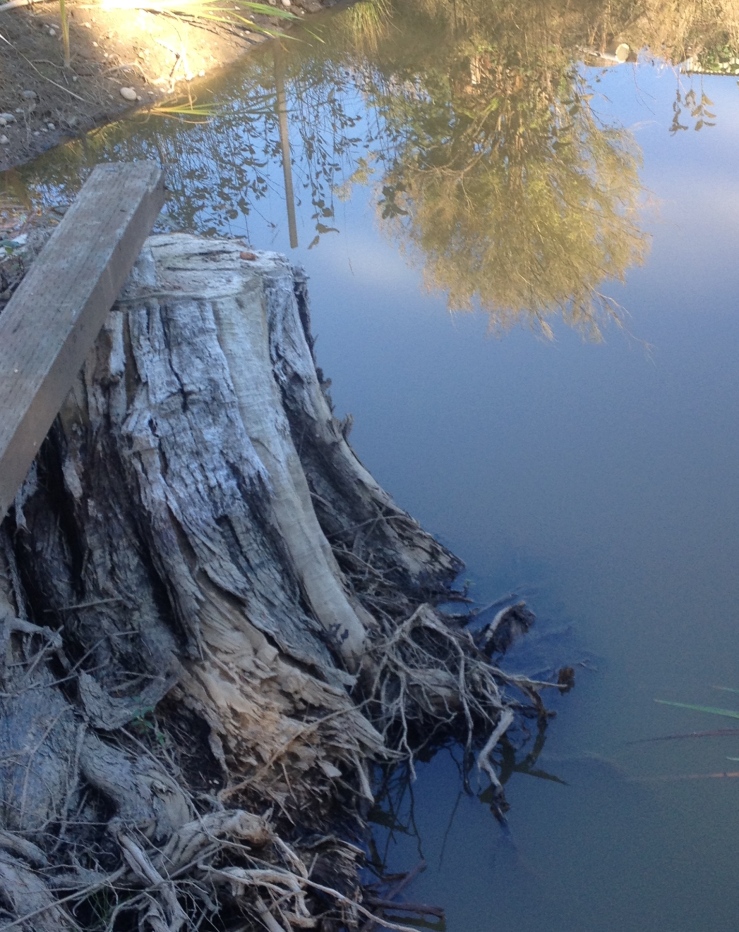 The pond has drawn in a variety of species from The Great Blue Heron, to a Kingfisher from time to time. Deer regularly cross down to drink, then skirt along the lower bank to stay out of site. Now that their alder cover is gone, they might choose a new rout of sneaking to stay out of sight. I watched one of the last dragonflies buzzing along the water’s surface yesterday, and wonder how many beneficial insects have used these waters this summer to reproduce. Swallows used the mud to build nests, and all manner of indicator species (our reptile and amphibian friends) have been documented in the waters, though the sound of chorus is silent for the colder months at hand.

This pond will continue to seal and fill, working towards becoming a full and bountiful waterscape to host the growing population of diverse species at Leafhopper Farm. In the near future, an aerator will be put in to add oxygen to the water and help keep a balanced pH in this aqua habitat. Eventually, this watering hole will also support summer soaking when the hot day of harvest is over, and continue to encourage sensitive plants and animals to thrive alongside human stewards practicing holistic intensions on the land.