It’s October in The Pacific Northwest, which means, the mushroom spring has arrived! Mushrooming is high on my list of things to do in the forests of Washington, and it’s a lifetime of learning these fungi friends. This year I added two new species to my list of edible harvest, the honey mushroom, Armillaria mellea and shrimp russula, Russula xerampelina. The season is going quite well so far, and I look forward to hunting more as the damp fall continues to settle in.

Chanterelles are the most recognizable edible mushrooms on the west coast, and prized by many as one of the most tasty. Cantharellus cibarius pops on the forest floor, with golden yellow cap contrasting with the brown duff and green moss. Sometimes, they are hiding just under the ground debris, so you have to really look closely to see the prize waiting just below the surface. You’ll be rewarded with buttery flavor and rich texture to be sure!

Puffballs are another great edible, found in fields and gravelly compacted soil around the world. You have to find these guys while they are still quite fresh, before the classic puff effect of the spores happens. These Lycoperdon perlatum were chilling all over the old logging road up slide mountain near Mt. Baker. I call them the chicken nugget mushroom, and usually fry them up in batter. They really taste a lot like chicken. I cut each one in half before battering it to make sure there is no spore discoloration happening in the middle. You want a pure white flesh all the way through.

Some mushrooms are just beautiful to look at. I came across these coral fungi and took a moment to appreciate the feeling of being under the sea. Though these fruiting mushrooms are not edible, their ambiance is something to experience in a temperate rainforest. 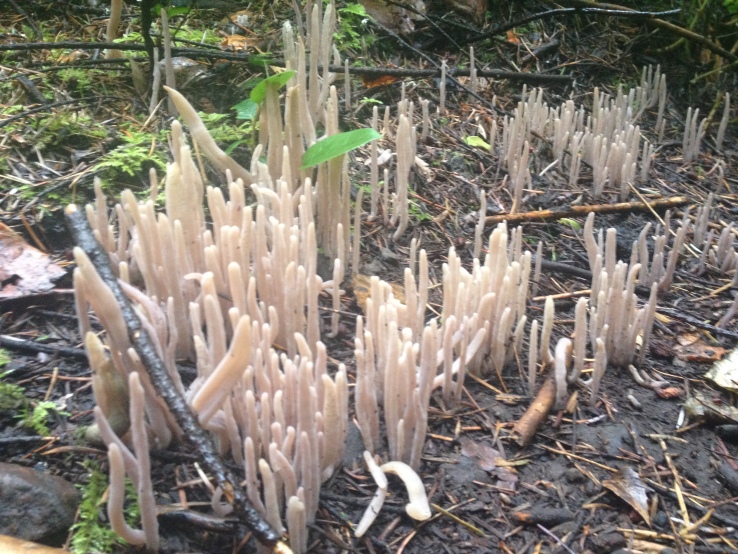 As I delve ever deeper into my mushroom passion, I learn more and more about how little i really know. Mushrooms are a life time obsession, and it takes a very refined eye to pick out some of the more elusive species one can eat. The saying, “a reckless mycologist lives a short life” is a very true statement. When people ask me to tell them about which mushrooms are edible, I explain that it’s not a skill to talk about, but to show. There are some “safe” beginner species to select from, and even those I want to identify in the field and handle with a first time picker before turning them loose in the forest to enjoy the endless bounty. Be wary of anyone who says, “they just know”a mushroom is safe. There are some key features of each mushroom species which can give a definite identity to each mushroom species, but it’s not always possible in the field.

Here are two mushrooms that could be the same species. On the left you have a shrimp russula. Its pale pink stipe (stem), sticky rose colored cap, and the smell of fish give it away. On the right, the younger russula could be a shrimp, its got a sticky reddish cap, but a lack of pink stipe and the missing shrimp smell prevent positive I.D. Young shrimp russula don’t have the shrimp smell, and some lack the pink stipe at this stage. I’ll have to go deeper to positively identify this younger mushroom, and I can do that using advanced field guides. On this picking trip, I left the unsure fungi in the woods, choosing to be safe with my limited knowledge. I did go home and read about alternative identification tactics for the russula, and will take one home to check the spore print next time. I always say, if you don’t know for sure, leave it be. Or, take a sample to study at home, but DO NOT EAT! I grab crazy fungus forms in the woods all the time to learn about, but I NEVER eat them. If you follow the simple rule, if you don’t know don’t eat, you’ll be fine.

I want to encourage people to learn about fungus, because it’s a great kingdom of flora which is sadly neglected because of fear, stemming from ignorance. Here in Washington, there are a lot of mycology clubs and classes to be found, and I’m sure if you do your research, where ever you live, you’ll find there are experts around who would be thrilled to take you mushrooming. I recommend it! If you choose to go on your own, I would caution that you just go to take samples for observation, not eating. That way, you can take all the fungi you want to learn about without any risk to yourself or others. Taking pictures of mushrooms in the woods is also a great way to get to know them, but identification usually involves a spore print, which requires a mushroom sample. Again, find a club to join and go out with experienced people, that way you can learn together and enjoy a growing confidence in mushrooming.

If you are local to the Snoqualmie Valley, and wish to join me on a foraging adventure to get an introduction, please contact me through the comments section of this blog entry and we can meet up to explore the local woods for some great fungi fun!