Leafhopper Farm made an investment in mealworms a few months ago. The insects have been great learning, a whole new animal system within the farm that has set its own president. By this I mean, you can’t just go to the local grange to talk about insect farming; outside of bees, and the passive cultivation of worms and other beneficial insects for the garden, most people would never think about the livestock potential of bugs. But when you start looking at the numbers, insects really add up.

You get more nutrition 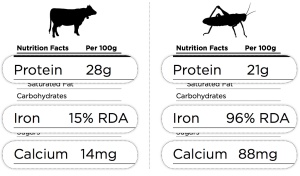 from bugs per pound than any meat, the cost and time caring for the bugs is also minimal, and the overall impact of an insect growing operation is minuscule on the environment, in fact, one could argue that insect raising is a support to nature. Meat animals demand a lot of space, food, water, and time. If you are growing the animals sustainably they need acres of rotational pasture and hay in winter. Bugs have no where near those constraints. A sizable growing operation uses only a few gallons of water a week, if that, because bugs can get their water from the food they eat, like an apple slice or even a potato peel. They also need only a shoebox sized space for literally thousands of bugs.

While you would be watering and feeding your meat animals every day, bugs can go for a week without fresh apple slice and a month before grain bedding needs changing. The bugs have a much quicker lifecycle, allowing fast harvesting turn around. You can eat bugs throughout their life cycle in all their fun stages. Most meat animals have to grow from months to years before reaching full butchering weight. In the end, bugs are also far less impact on the land then the typical farmyard livestock.

If bug eating is not your thing, think of the insects as fodder for another more favorable livestock you prefer to eat, l

ike chicken. I feed my laying hens the beetles and mealworms I grow as a supplement to their foraging. The bug bedding is a mix of organic grain so the birds can eat that too. But if eating a bug is only a gross out thing to you, I’d take a moment to explore the advanced world of culinary insect arts. Daniella Martin,  friend and fellow graduate from Marlboro College in Vermont, wrote a book called “Edible” which goes into great depth about hip insect eating.

NPR just ran a story on cricket flour, which is growing in popularity here on the west coast as people with gluten allergies search for nutritious alternatives. Nut flours are an easy go to, but nuts take a lot of water to grow, which is becoming an issue in many drought stricken places. Insects demand far less water than any nut tree or livestock animal for that matter. The great thing is, ground up insects don’t look anything like bugs, but they are full of nutrients and have a nutty flavor.

Folding insects into your diet can also aid in keeping your greater food chain organic. Since bugs are so sensitive to all the pesticides and chemicals around them, they cannot consume roundup ready crops or over sprayed veggies. If these industrial products are killing the sensitive insect, what are these chemicals doing to our more vulnerable cells and membranes? The mealworms have made me start talking to my local suppliers of grain and produce. I was surprised to find that so much of the livestock feeds are too heavily treated with chemical fertilizers and medications which would kill the insects I am trying to cultivate.

In shifting my mindset around bugs and the neglect of one of the greatest living populations on the planet, I’ve come to realize that the answers to some of our biggest problems in getting enough nutrition and feeding an ever expanding population, takes smaller solutions, which ultimately sustain us and keep a better balance with the natural world we are always learning from. Leafhopper farm is exploring the possibility of insects as a staple for the animals and people of its community. Perhaps with patients and a little bit of clever preparation and packaging, American pallets will begin to discover what much of the rest of the world already knows; bugs taste great!